As we close the chapter to our month of focusing on film and literature we thought it might be nice to celebrate eco warriors in the limelight. These may be film stars, TV personalities or authors, who are all working towards the same goal as us here at E.C.O. These are people who are working in active service to protect our planet from degradation and destruction. Using their position in society to amplify their voice and increase awareness is a necessary step to ensure the message of our climate crisis is reaching as many people as possible.

The 93-year-old’s work has brought the natural world into our homes for over 70 years. From Zoo Quest to Life, Planet Earth, the Blue Planet, Dynasties he has travelled with his team across the globe to highlight the importance of animals, their habitat and the impact of human activity on the future of the animal kingdom.

He has received 32 honorary degrees from UK universities, has 8 styles and honours since 1926 which means his official name is Sir David Attenborough OM CH CVO CBE FRS FSA (head over to Wikipedia to find out what all of those mean!). He has at least 20 species (both living and extinct) named after him, and countless awards.

Sometimes Attenborough has been criticised that he does not focus enough on environmental messages in his documentaries, and they are usually an afterthought. However, we argue that these are not only for entertainment, but also to show the beauty of the world that is still in existence which we need to save urgently before all of the incredible species are at risk of permanent extinction.

Again, there is little we need to fill you in on about why she is one of our favourite climate activists. I was lucky enough to see her talk in 2019 in London and she was so passionate and engaging. The main reason why she is one of our favourites is the landslide rate at which her ingenious action to skip school has caused a global phenomenon in less than two years.

She has earned her place in centre stage by fearlessly standing up and speaking against suits and corporations at the age of 15. Speaking at the UN Climate Action Summit, COP25, World Economic Forum has earned her countless awards. She also has collaboratively worked on two books including a collection of her climate action speeches No One Is Too Small To Make A Difference.

We want to give you an extra present if you haven’t had a chance to see this yet – When Attenborough met Thunberg. A four minute conversation between our two favourite activists!

DiCaprio is known to be one of the most active celebrities in climate activism. He founded the Leonardo DiCaprio Foundation to promote environmental awareness in 1998 and in 2014 hosted the world’s highest grossing environmental charity event which raised nearly $40 million. Subsequently he was appointed as a UN representative on climate change. In December 2018 to fight climate change his foundation donated $100 million dollars and pledged $5 million from his NGO Earth Alliance in order to help protect the Amazon which was destroyed in 2019 due to fires.

Along with a successful acting career he has also worked on two environmental documentaries – The 11th Hour and Before the Flood which both were critically acclaimed and won a number of awards, we highly recommend you watching these.

Since the 80s Streep has been advocating for the Natural Resource Defence Council after a report was published detailing the dangers of pesticides. She co-created Mothers and Others to fight for tougher standards and educate shoppers and retailers to chose organic, local produce. She is also involved with the Children’s Health Environmental Coalition which aims to avoid toxins in water and food to protect children.

Streep was the first celebrity to ever wear an ‘eco’ gown, at the 84th Academy Awards she wore a dress made from Eco Certified Fabric which was sourced by the Green Carpet Challenge.

Mark Ruffalo has spent over a decade fighting against fracking and dubbed by the New York Times as ‘anti-fracking’s first famous face’. He has appeared on numerous TV shows and written interviews to speak out against gas companies. His work also includes Dear President Obama: The Clean Energy Revolution, a documentary which looks at Obama’s legacy concerning the enormous expansion of oil and natural gas drilling.

Caroline Lucas, leader of the Green Party in the UK, she is a campaigner and writer. She writes reports, articles and books on green economics, environmental and social issues like localisation, alternatives to globalisation, trade justice, animal welfare and genetically modified food.

She is the vice-president of the Royal Society for the Prevention of Cruelty to Animals, vice chair of All Party Parliamentary Group on Peak Oil and Gas, is matron of the Women’s Environmental Network. She has won many awards and was listed by the Guardian as one of ’50 people who could save the planet’ in which Jonathon Porritt stated “She is the most inspiring politician the Green party has had since its inception – honest, articulate, passionate.” The Guardian continued ‘In the meantime, she is intensely disliked by EU commissioners and much of big industry after drafting laws to force airlines to pay the true environmental and social costs of flying, forcing a legal investigation into nuclear power, taking on chemical companies and harassing the commission at every opportunity on trade, GM crops, globalisation and animal diseases.’

In 2005 Al Gore released ‘An Inconvenient Truth’ which led him to receive the Nobel Peace Prize (shared with the IPCC), it won an academy award and an honorary Humanitas Prize (which was the first Special Award the organisation had handed out in over 10 years.

It was arguably one of the first documentary which boldly and statistically estimated the effects of what was then called ‘global warming’ and predicted what is essentially happening to the earth now, 15 years later. He released the sequel in 2017 in a continuation to battle climate change.

He has spoken out as a vegan attributing the water used and carbon dioxide produced is directly connected to our global crisis. He founded and heads many green organisations and campaigns.

Many call him a hypocrite for some of his actions going against what he preaches – we think he should be here for solely for the documentary as it alerted people to the conversation around climate crisis as early as 2005 and his political influence would have allowed the documentary to be considered by many politicians and those in power.

Slightly rogue I know, but worth a mention as one of the first environmental protectors. While president of the United States (1901–1909), Roosevelt set aside hundreds of millions of wilderness acres, actively pursued soil and water conservation, and created over 200 national forests, national monuments, national parks, and wildlife refuges.

Many of these either are under threat and some may no longer in exist today with industrialisation and development of the US cities. However, carving these areas and compounding their importance and protection from an early point in US history could arguably have led to those which are protected being saved in the development of rural areas of the US.

Billie Eilish has shot to fame at the age of 18 and recently won five Grammy Awards for her latest album which she is currently working towards creating the first net-zero music tour to showcase. Currently she has 55.7 million Instagram followers which is a platform she frequently uses to share environmental messaging and animal welfare messages. Having such a large following allows Eilish to encourage people via social media – especially the younger generation of activists.

Eilish has been a vegan since the age of 12 and has shared footage of the largest undercover dairy investigation to date – Fair Oak Farms’ brutal footage of treatment of animals, a subsidiary of Coca-Cola. She worked with vegan actor Woody Harrelson in a video called ‘Our House is on Fire’ which urged people to wake up to the timelines of the climate crisis emergency. She has also spoken out against the fur trade and has worked with clothing brand Freak City to create clothing which is vegan, loose-fitting and gender neutral.

McCartney has been vegetarian since 1975. After Linda’s death he promised to continue working for animal rights, to ensure Linda McCartney Foods remained free of genetically engineered ingredients he spent £3 million. He has narrated a number of documentaries surrounding animal treatment, the meat trade and released ‘Once a Week’ promoting Meatless Mondays. He even wrote to the 14th Dalai Lama, Tenzin Gyatso asking him why he wasn’t vegetarian. When he read the response it was due to doctor’s orders, McCartney said ‘That isn’t good enough’.

After marrying Mills he became increasingly involved in campaigns against land mines, seal clubbing, anti fracking and saving the arctic.

If you have any celebrities which you think we should have on our list please let us know!

Grace has quit the 9-5 lifestyle in London to study marine conservation in Thailand. She will subsequently work as a scuba diving instructor with emphasis on teaching students about marine conservation and anthropogenic impacts to our oceans. Her favourite eco product is Oliva Olive Oil Soap. 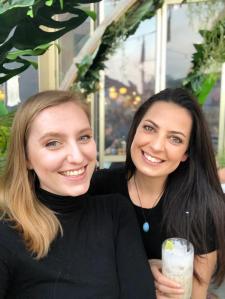 Hello and welcome to E.C.O. We, Grace and Lauren, along with guest writers post weekly articles containing advice, reviews, tips and recipes for those who want to make small changes to their lifestyle. We believe, no matter how big or small, efforts to become more environmentally conscious can change the worrying outcomes predicted by scientists.

Read more here about us here